In the following we show you how to load the Colossus Audio Unit plugin into two popular DAW apps on iOS as two examples: GarageBand and Cubasis. In case you are using another DAW app, and since the way how to load and work with Audio Unit plugins varies between individual DAW apps, please refer to the user manual of your DAW app or contact the manufacturer of the host app for more information on this topic.

For this example, start a new GarageBand song as usual.

You should now be on the tracks view of GarageBand.

Tap on the instruments button located top left, to get to the sound selection screen of GarageBand. 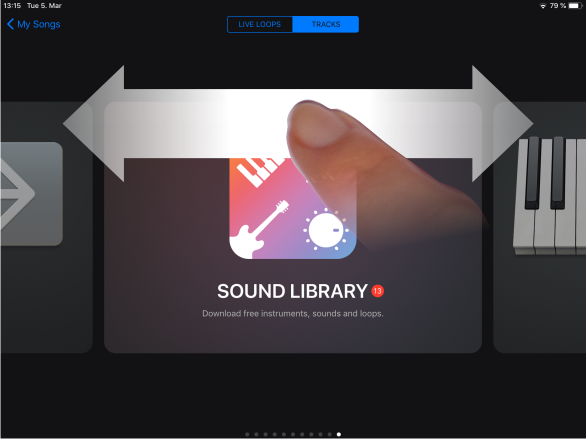 On the sound selection screen of GarageBand you can chose from various different types of sound sources.

Swipe horizontally on this screen until you reach "EXTERNAL" as sound source (see next image). 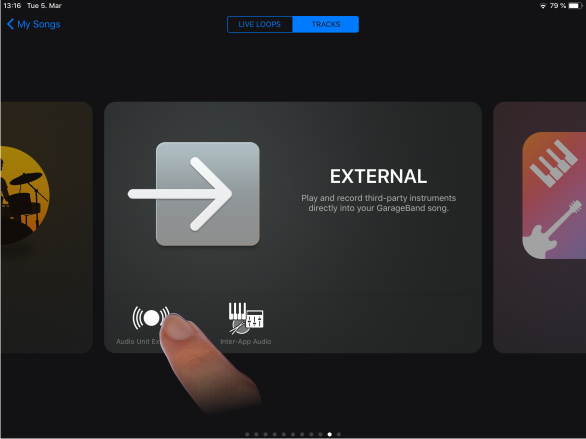 Now tap on the "Audio Unit Extension" button on the lower left.

A list appears with audio apps which provide an Audio Unit plugin and are currently installed on your iPad / iPhone.

Tap on the desired audio app icon to load its Audio Unit plugin into GarageBand, e.g. tap on the "Colossus Piano" icon.

GarageBand automatically switched back to its track view and shows the user interface of the Colossus Audio Unit plugin in the center of GarageBand's track view.

Once the Colossus Audio Plugin completed loading its sounds, you will see the status message "Ready" on the screen.
If you want to select a different piano than the default one, tap on the black box with its name 1 . This opens a sound selection dropdown. Select the desired piano by moving this sound selection upwards 2 and downwards 3 and tapping finally on the desired instrument name.

Obviously you probably want to use several different Colossus Piano sounds in your GarageBand song.

To do that, simply create a new track by tapping on the + button on the lower left of GarageBand's track view and then repeat the steps described above to select the desired Colossus Piano sound on the new track.

As a result of your work, you might want to export your GarageBand song as audio file and share that final audio file with other people.

To export your song as audio file, first tap on "My Songs" button on the top left to get to GarageBand's file browser screen. 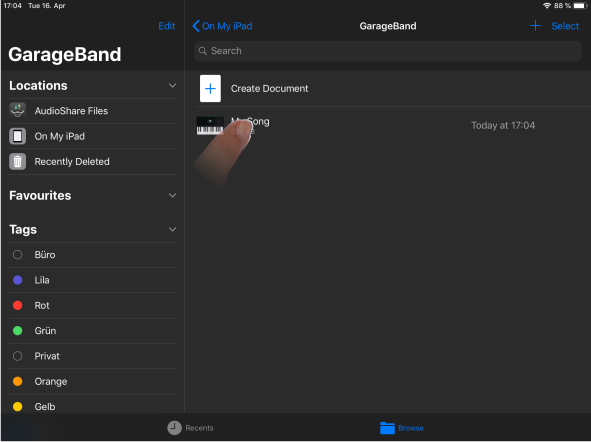 On the file browser screen of GarageBand you can see a list of all your GarageBand songs.

Tap and keep holding your finger for about a second on the respective song that you want to export as audio file, a popup appears with options that you may do with the song. 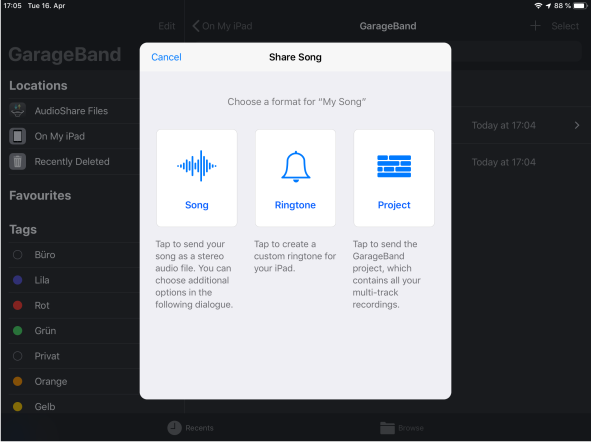 Tap on "Song" to choose "audio file" as the desired export format. 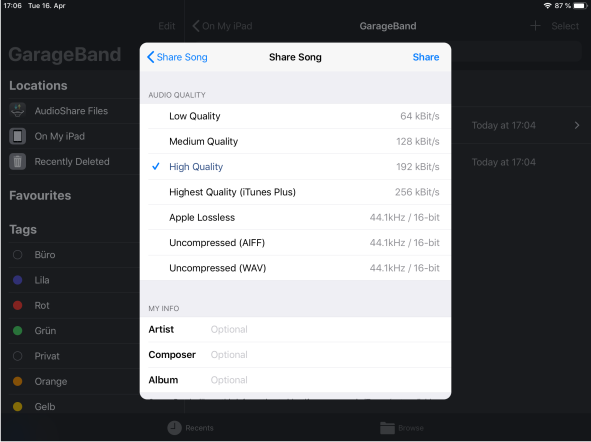 Once you made your quality decision GarageBand will start to render the final audio file. This rendering process usually takes between several seconds up to about a bit more than a minute, depending on the amount of tracks, Audio Units being used and length of the song. 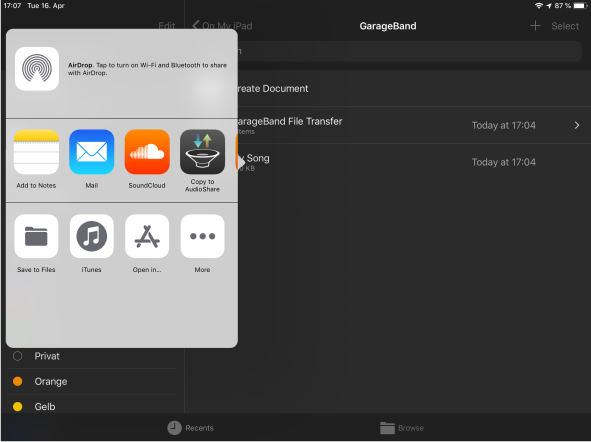 Once rendering of the final audio file completed, you are asked as final action where the audio file shall be stored or sent to.

Select one of the apps or services listed on this popup to finally store, upload, share or send your audio file at the desired location or to import it into another app for subsequent actions. 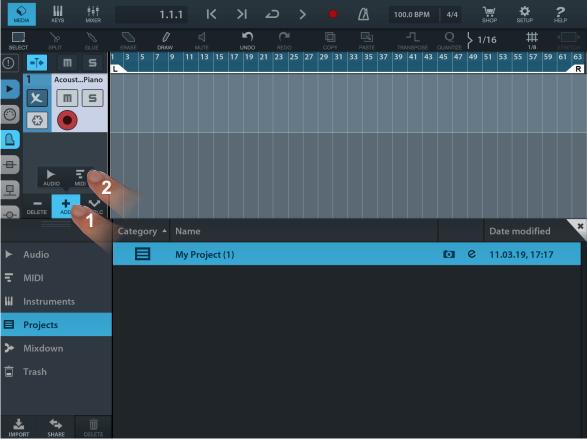 Like in the previous example with GarageBand, we are assuming in this example with Cubasis that you just created a new Cubasis song at this point.

On the tracks view of Cubasis tap on the "ADD" 1 button on the lower left and then select "MIDI" 2 to create a new MIDI track. 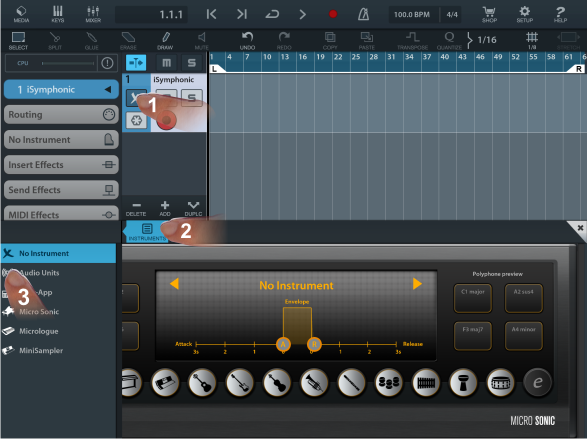 Now tap on the instrument 1 button of that MIDI track, then tap on "INSTRUMENTS" 2 located at the vertical center of the screen and finally tap on "Audio Units" 3 on the lower left section to get to the list of Audio Units.

You should now see a list of Audio Units available on your device which should appear on the lower left section of the screen.

Tap on the desired app to load its Audio Unit plugin on this Cubasis track, e.g. tap on the "Colossus Piano" icon.

Once the Colossus Audio Plugin completed loading its sounds, you will see the status message "Ready" on the screen.
If you want to select a different piano than the default one, tap on the black box with its name 1 . This opens a sound selection dropdown. Select the desired piano by moving this sound selection downwards and upwards 2 and tapping finally on the desired instrument name.

In order to create a final audio file of your Cubasis song, you first have to get to the Media bay section of Cubasis.

So tap on the "MEDIA" button on the very top left of the screen.

So tap the "MEDIA" button on the very top left of the screen1, next on "Mixdown" at the lower left section 2, then on "Create Mixdown" 3.
A popup dialog appears on the center of the screen 4. Select the desired audio rendering options for your song and finally tap on "Start Mixdown" to render the audio file. 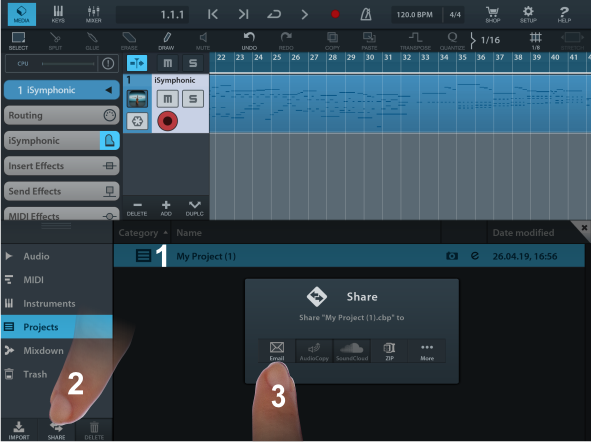 The rendered audio file is now saved like your Cubasis songs / project files at the file space of the Cubasis app. So you can see the audio file listed in the media bay section of Cubasis and listen to the rendered, final audio file there. To actually send or share the audio file with other people, it takes some more final actions:

Select the project 1, then tap on "SHARE" 2, and finally choose a destination for the already rendered audio file 3.